The week of October 19th-24th, I gained permission from my school to take a break from our readings to teach solely about one of my favorite holidays, citing it as an “important part of Western culture.” The students seemed to get a kick out of my costumes, and were pretty attentive for the duration of my classes.  I also attended a couple Halloween parties the weekend directly following Halloween. Overall, it was a pretty fun holiday considering not many celebrate it in this part of the world!

Halloween (wàn shèng jiē 万圣节), being of Western -specifically Celtic – origin, isn’t a very big in China. It’s slowly becoming more well known, especially gaining popularity among children and those who love to cosplay. However, outside of cities with large expat populations, you won’t find the day to be of much significance in daily life here.

China does have its own holidays to honor the dead, specifically Hungry Ghost Festival (August) and Tomb-Sweeping Day (April). Neither are very jovial holidays, nor are they consumer-oriented. Rather, they’re super serious and sad, meant to simultaneously grieve, respect and honor the dead. On these holidays, families provide material offerings to their ancestors, burn special money for them to use in the afterlife, and clean family graves among other traditions. Anything to do with death seems to be a very somber affair in China. Yet, with the influx of foreigners and exposure to western media, from what I’ve seen, Halloween is starting to catch on as a fun, gimmicky capitalist activity.

Inside RT Mart, one of the biggest grocery stores here, besides Walmart

Pizza Hut was decked out in Hello Kitty for Halloween

In my city of Lishui (Liandu district), most American-owned chain stores and restaurants were decorated for Halloween. This included Pizza Hut, Walmart, McDonald’s, and KFC. There were even some non-American stores that had Halloween-themed deals to entice you to spend money. You won’t find adult costumes and accessories at stores though. The Halloween stuff is almost exclusively geared towards children. Luckily we can order almost anything on Taobao (and since most things are made in China, they’re really cheap). Many training schools, private tutoring centers, had some sort of Halloween party or trick or treat activity. Some foreign teachers, like myself, made an effort to touch upon the holiday in class. I made a week-long lesson of it!

Loving the boy in the pink hat! 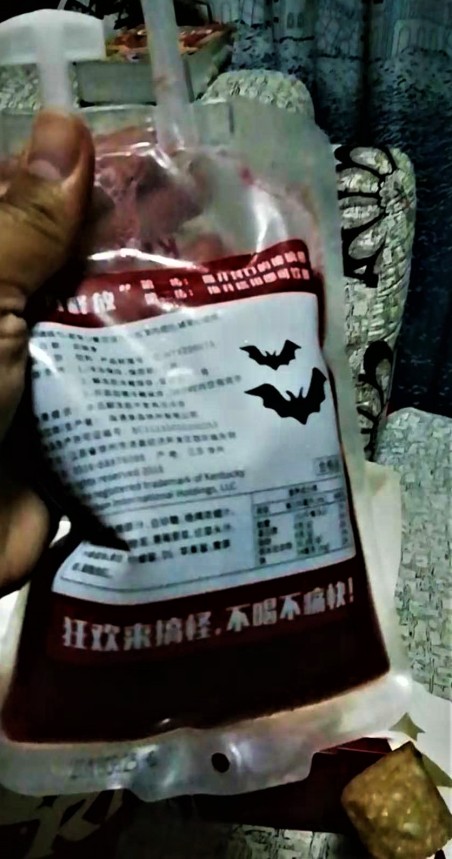 I dressed up as something different each of the four days I had classes, culminating in my scariest outfit on my last day. During my lessons, I talked about the history and cultural significance of the holiday along with customs of countries that celebrate it (Ireland, Canada, USA, the UK, Mexico, etc). In the process of doing a version of this lesson the last two years, I’ve noticed it’s become much easier to teach as I now can remember how to express more in Chinese than I had been able to previously. It’s also fun to learn different words, such as the names of monsters, from excited students! This year, I learned how to say witch (nǚ wū女巫 ), demon (è mó恶魔), and vampire (xī xuè guǐ吸血鬼).

Ladies of the English Department

I practiced my cackle all week for this

The Teacher from Hell!

In my 7th grade English Club at the Middle School, I told the story of The Girl with the Green Ribbon (one of my go-to scary stories), and showed the Nightmare Before Christmas. In my 5th grade “Elite English Corner” at the Primary School, we played games and watched the movie Coraline.

Reactions to my costumes varied. My coworker’s responses ranged from mildly amused to exasperated tolerance, some calling me crazy. Pedestrians and other drivers on the road did a few double takes. I especially enjoyed watching their faces when I had my fangs on and smiled at them. The kids loved getting a break from our book to watch clips of families trick or treating together and one Disney short involving Donald Duck and his nephews. Some of the younger students were legitimately terrified when I showed up to class and ran away– one poor girl screamed and fell cowering against the door! She said she was okay after the initial shock. I was amazed that some students could even sing the Halloween song! The one that goes “Trick or treat, smell my feet…” 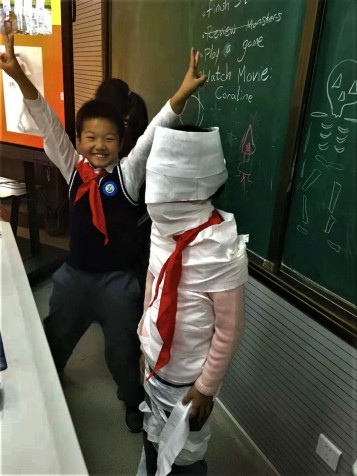 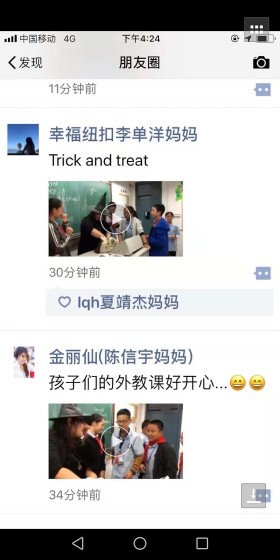 I made it onto a baopals contest!!

Funny, I do have students who have lived abroad in the USA, so I had a few stand up and tell the class about their experience trick or treating.  One adorable 7th grade boy who was at Georgia Tech with his dad had an amusing story about dressing up as a vampire and knocking on this dude’s door. I assume it was another Chinese guy as the student said the man didn’t know it was Halloween. The kid knocked again, and the guy ended up giving him candy to go away.

Some students made me really cute Halloween cards: 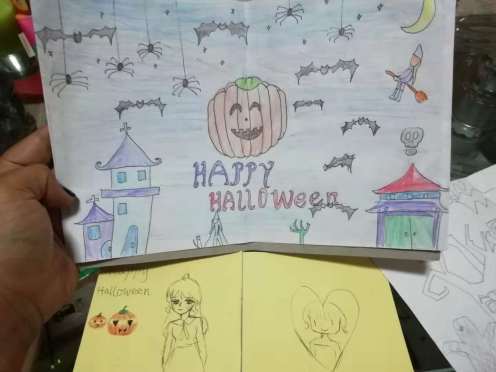 My students are so sweet 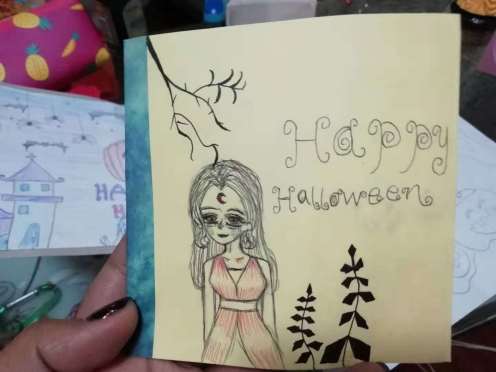 Alllsoooo, I think my makeup skills are improving slightly! Check out my devil costume from last year compared to its resurgence this year:

The past two years or so, it had been tradition to hold the AYC expat party at the only 24 hour bar in Lishui. However, we alumni decided against actually holding an official party this year. This was mainly due to taking the previous years’ fiascos into consideration along with the ridiculous amount of work needed: someone always loses a lot of money because people either don’t pay their entrance fee or close their tab, we’ve had people come close to alcohol poisoning, the bar owner last year frustratingly broke the sound system for his 15 seconds of fame performing karaoke, and other mishaps.

My witch outfit from last year. I lost the nose, so had to wear the fake chin as a nose, haha

So, this year, we were all in agreement to just have people show up somewhere in costume…And it worked out! After a friend had her “little kid” Halloween party at a swanky new bar with a huge performance space, we opted to keep the space for the night and have ours there.

How cute are they?

My friend’s students put on a little performance

Their take on Goldilocks and the Three Bears

Many expats from all over, including the nearby university, turned up. Surprisingly, I learned from them that there are currently lots of students from the MENA (Middle East, North Africa) region studying in Lishui. I also had an awkward conversation with a man from Sudan who told me he was currently in China because he wasn’t allowed to study in America because of Trump. Additionally, we had a small reunion with other foreign teachers that I’d met at one point or another last year. 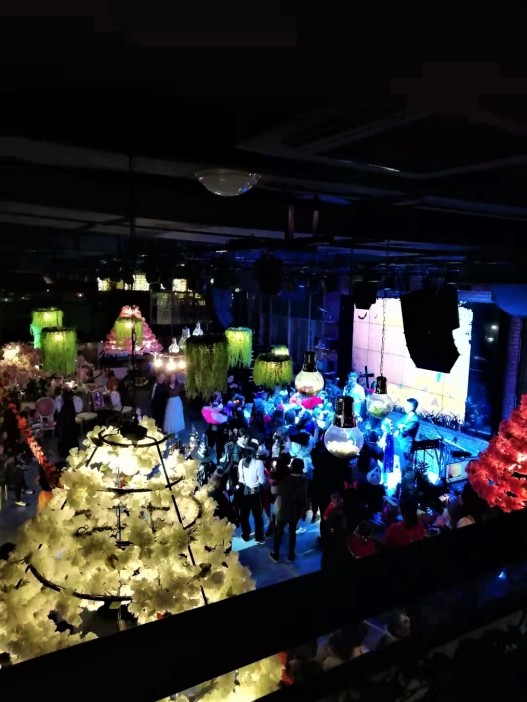 Not a bad space 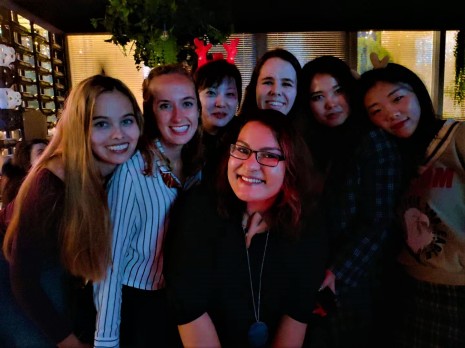 Old and new expats from around the world.

Toward the end of the night, a bald dude who apparently was the creator of some Chrysanthemum Beer was forcing foreigners to take pictures with him and the beer in exchange for free drinks…

Needless to say, I didn’t want to stay too long at the party after that, and I ended up driving with my friend Dani (you can checkout her YouTube channel here!) to get some awesome street food as a late night snack before heading home.

View all posts by LivingBetweentheLines