My favorite kind of days are those bright, warm sunny ones, with a light gentle breeze and clear blue skies as far as the eye can see. This was one of those days as we headed out of Lishui’s Liandu district (the main city center where I live). My 7th grade coworker, Amanda, from the Middle School invited me to ride with her, her son Kevin, and his friend Apple, to on an outing to a nearby village called Shaxicun (沙溪村). We followed Amanda’s friends in another car to the location, driving past beautiful rolling green hills and steep slopes patterned with terraced fields. Water from flowing streams glinted in the sunshine. I was happy I decided to accept her invitation, rather than staying at home playing computer games. 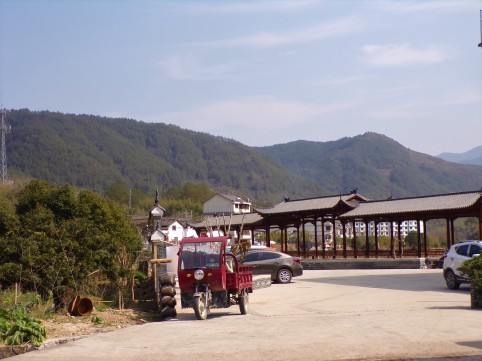 Our stop for lunch 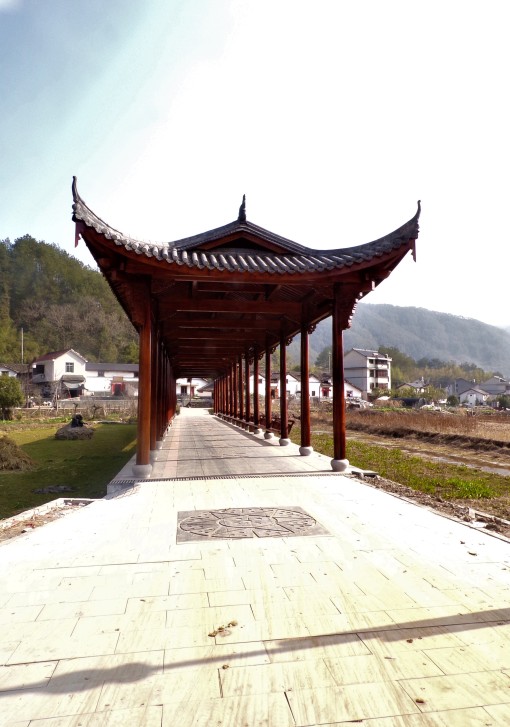 A bridge on the way in

When we first arrived, a table with stools was set up for us outside a farmhouse we were to have lunch at. I have noticed before that a lot of family houses out in the countryside double as little roadside restaurants for people to stop in. While the extended family who owned the farmhouse began cleaning leeks and peeling garlic for our meal, I followed Amanda and her friends on a stroll around the ancestral temple and nearby farmland.

A field of wilted lotuses

She needs a better bra, ha.

Shaxicun appeared to be a peaceful picturesque village tucked into a little valley. Its inhabitants belonged to the She minority, one of China’s 56 ethnicities. The She can be found scattered throughout Zhejiang, Guangdong, Jiangxi, Anhui and Fujian provinces.

Check out that cured leg!

Inside the town temple, there was an altar, a stage and some informative posters about the community. I learned that everyone in this village has the clan surname of “Lan”(蓝). Gazing at the posters, I realized I have seen the She costumes before in the Lishui Museum with men and women both draped in various shades of reds and light blues. The women’s ceremonial hats of strings and wood reminded me vaguely of sailboats.

Back at the farmhouse, the teenagers with us decided to set up a glass chemistry set they brought on the concrete in front of entrance. Their parents and I chatted, sitting out stools around them to snack on oranges and pumpkin seeds. The chemistry set started off well, but apparently the guy who sold it to them sadly didn’t give them a complete set, and so that idea was nixed.

Prepping the table with, I think, Tsampa

Apple had a hard time, for some reason 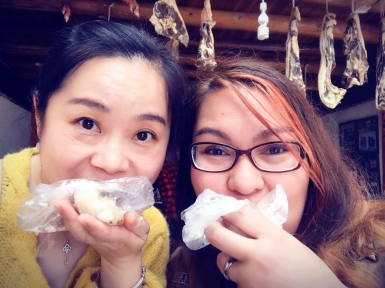 Thankfully, while the kids were looking for something to do, the family who was cooking for us brought out sticky rice for us to eat as a snack. This soon turned into a fun mochi-making activity where each member of our group would test their strength with a giant wood mallet to pound the cooked sticky rice in a big stone bowl outside.

Once the mochi was ready, we all washed our hands and then gathered around the dining table to shape the dough into balls. For the filling, we were given a mixture of sesame seeds and brown sugar. Fresh mochi is so deliciously soft and chewy. It made me a little homesick for Japan, where as a kid I’ve had some experience forming mochi.

Lunch was good! I wasn’t expecting the cured pork meat I spied hanging over us earlier to be so tasty! We also had duck stewing in an electric pot in the middle of the table and various sautéed vegetables from the farm.

We toasted the new year with some kind of sweet homemade wine that had egg in it. I’d never had an alcoholic drink with whole eggs before, and the smell and taste puzzled me. It wasn’t scrambled egg, more like the wispy strands of egg from egg drop soup. After having to finish my cup, I must say that it wasn’t my favorite, and luckily no one pushed me too much to have more.

After lunch, it was proposed that we all head to the nearby scenic hiking area of Dongxi (East, West) Rock. Some of the boys wanted to go back home to play basketball, but in the end everyone (namely the parents) decided it would be good to go “have a look,” as the Chinese would say. 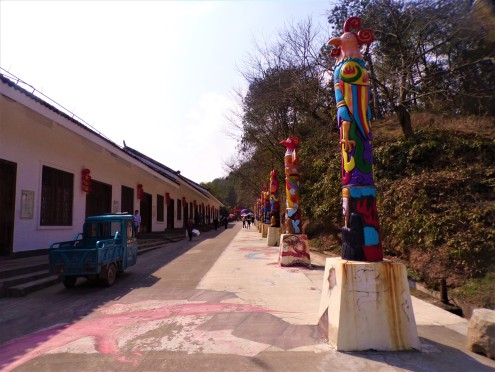 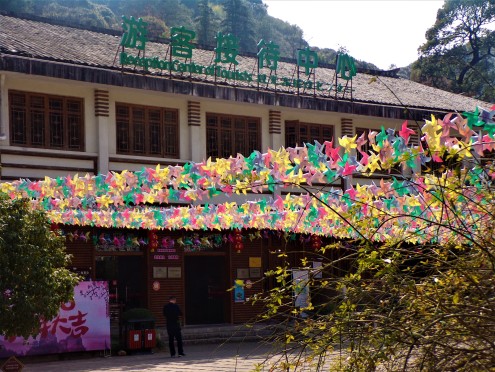 Pretty pinwheels at the ticket booth.

We somehow were able to borrow the ID card of the farmhouse owners, since apparently tickets are cheaper with a local id. The road leading up to the ticket booth passed by a few farms and farm animals. There were chickens, goats, and dogs wandering freely. Remnants of firecrackers littered some of the cross streets (fireworks were allowed in the countryside during New Years). There were vendors, and a row of rooster-looking totem poles with dragon and phoenix chalk sketches on the ground in front of them.

Time for a hike

Like most nature parks (or tourist places in general) in China, this place was not disability friendly. The hike was a little steep and narrow at times. There was a very claustrophobic little cave called the “Water Curtain Cave” that had water flowing down the ledge that people attempted to climb down from, making the rocks slippery. The path there was full of people, and a little dangerous as one had to step around deep gaping holes while simultaneously trying to avoid those climbing out.

The path varied quite a bit, going up hill then downhill and uphill again. At one point, the stairs went through a tight gorge (Qingfeng Gorge) where one had to squeeze past a small opening in the rocks.  There was a hole in the side of one of the rock walls, next to an old well, that claimed to be tied to the goddess Guanyin (Avalokiteshvara) and could grant you blessings if you were able to knock a rock into the hole. 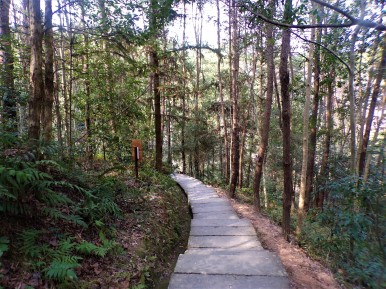 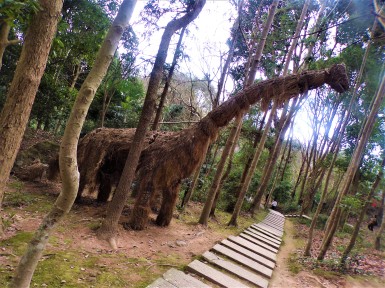 Overall, it was a pretty fun day! It was great to hang out with Amanda and her friends. I had some interesting random conversations with the teens who wanted to practice their English. We discussed everything from the housing market in China to their favorite musicians. I absolutely loved the weather, the fresh air, and the beautiful countryside. Hiking wasn’t too strenuous, and I imagine this place would be gorgeous in the summer with the flowers and lotuses in bloom. I hope I can come back to see it then!

More pictures from the outing! 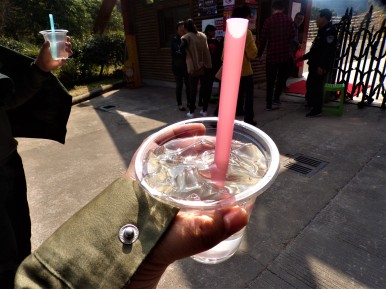 Entrance to the park

It kind of looks like the Shes can do the tinikling dance? 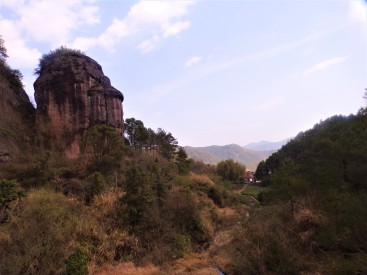 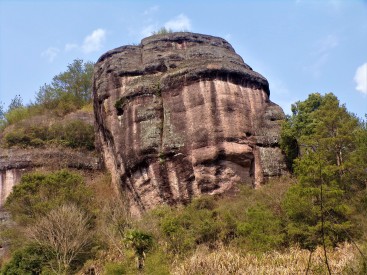 Named “The General’s Rock” because it looks like a man wearing a helment. 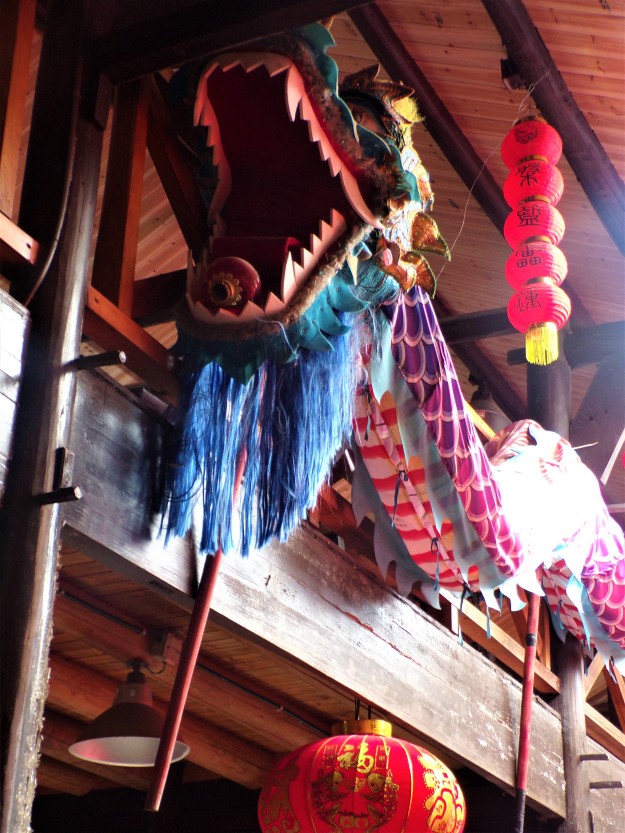 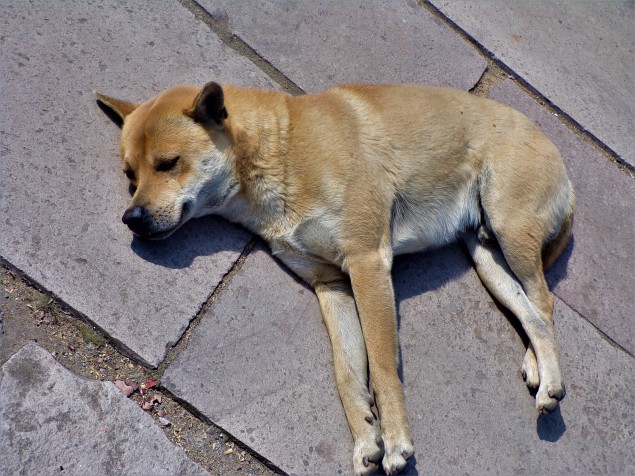 View all posts by LivingBetweentheLines